I received my driveshaft last Thursday and had it in the car on Friday. It is a beautiful piece and fits perfectly! I can see the craftsmanship in it and just wanted to thank you again for working with me, y'all are awesome!

I must tell you how nice the car runs now. When I installed your driveshaft I tightened the u-bolts as you instructed me. WHAT A DIFFERENCE, it is soooooo much smoother running when I let up on the gas pedal at cruising speeds. (80 /-).

I chased that vibration in the drivetrain for 8 years and 74,000 miles and because of your advice it's now wonderful. I never thought that changing the driveshaft to a well-balanced aluminum unit and only tightening the u-bolt nuts an 1/8 turn after the lock nuts flattened out would make that kind of difference.

I still need to work on achieving the zero difference in the engine angle to the differential angle, currently I’m holding at about a 1 1/2 degree difference. I will need to relocate the triangulated 4 bar mounting brackets next winter to make the final adjustment to the car.

Inland Empire Driveline Service went above and beyond to help with the V12 Camaro build. They made us a driveshaft that would hold the power and abuse that we were putting in our Camaro. The people were great and very knowledgeable to work with. They answered every question and pointed out some things to help us with the drive line. Very satisfied customer here and we will be ordering from them again for future builds !!!!!! THANK YOU !!!!!!!!
Mike Heim
Quality Custom Rides LLC
430 North Franklin St
Lancaster PA 17602
1-(717)-394-4164
www.qualitycustomrides.com 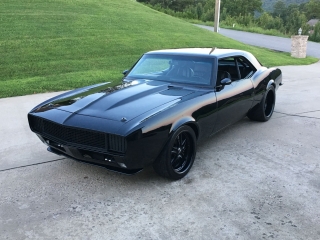 I was very impressed with how easy their process was as well as the short
time it took to get my driveshaft from inland Empire. I told the salesman
what I was building and how I intended to use it.  Then I gave him a few
measurements, and my driveshaft showed up a week later.  I'm a very
satisfied customer.

I own a 63 Impala convertible and dropped in a 350 w a 700R4 transmission and right off the get go I had a serious vibration. the first carrier bearing housing actually tore off the X frame and was knocking as the drive line turned. said bearing was replaced, still had the vibration and took the car into Independence Automotive in Helena, Mt and Eric installed a 3rd carrier bearing and I still had the vibration. Eric did some research and concluded with the torque the 700R4 was putting out the drive line was moving forward and the weakest point was the carrier bearing. He order a drive line from your shop, installed in on Thursday 5-14-2015, I drove it home on Friday and guess what "no vibration". for the first time in 10 months I was able to stand on it and not fear the carrier bearing would come apart. I took a picture of the drive line before it was installed and I will say that I was very impressed w the quality of material and the craftsmanship. that is one serious carrier bearing, I have taken the photo of the drive line to all 3 shops that worked on my car and explained to the mechanics what they need to do if some one like me modifies a transmission w a 2 piece drive line and they get a vibration like this. call Inland Empire Driveline and do it right the first time. my wife and I will be going to car shows this summer and your drive line will be discussed often. thank you for a superior product.
Eric and Trudy Erickson

I would like to start by saying you guys are the Best! I have a 69 Camaro Pro Street car with a 502 BDS 871 Teflon Stripped blower that is turning in the neighborhood of 1000 horsepower. When i got my drive shaft from you I was simply blown away, it was perfect. It was one of about 3 parts put on the car when I built it that needed nothing.
If ever you need a referral give them my number. I cannot wait till I get the drive shaft for the red Camaro.
I would not consider using another driveline company.
It would be an honor to put one of you guy's banner in front of my cars.

Just a note to thank you for your excellent service during my recent visit to shorten my aluminum driveshaft.. in by 9, out by noon.

The staff gave me credible guidance, your measuring guide aided with the perfect fit which saved me some money, to boot.

I am a satisfied customer which demonstrates that the excellent service is the same no matter what you drive.

As you know I had a distinct vibration in my street rod at 71-73 mph which we found to be in the old driveshaft. While the car was in the shop over the winter, getting some much needed rust removed and frenched tailights, along with a new motor, we installed an Inland Empire Driveshaft. I just got back from an 1100 mile trip in the car and must tell you how smooth and vibration free the car was. I don't know how you do it since you didn't measure for the drive shaft, we did.

Thanks for a great product delivered when you said it would be. I would recommend your products to anyone who wants a vibration free smooth running vehicle.

Greg, I feel that you have always given us a quality product at a fair price with consistent on-time delivery. That is why we choose to run Inland Empire driveshafts. Keep up the good work!

NHRA Be a Winner Program

Recently I was fortunate to win a certificate from Inland Empire for a driveshaft in your (NHRA's) Be a Winner sweepstakes. I just wanted to say thanks for this unexpected prize and to acknowledge the great job Inland Empire did when they honored my certificate .Thanks for having this program for the sportsman racer. 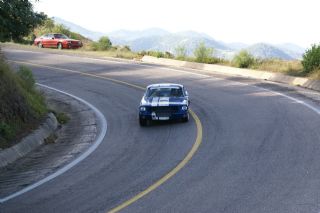 Just back from Mexico and the La Carrera Panamericana 2015 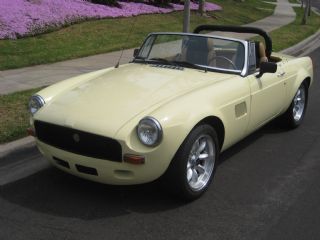 I saw the comment on the Miata the other day and it reminded me of my own experience.

My project was putting the engine and tranny out of a ’95 Firebird into my MGB.

I used the rear end from an S-10. When it was all installed I too called Inland Empire Drive Line at their Corona store. When I got the product it had a Jag flange instead of the S-10 one but this was immediately corrected.

The car goes 0 – 60 in 5 seconds. The driveshaft has been working perfectly for at least 10 years now.

My name is Randy Barrett. My father Bruce owns the '03 Miata that we installed a LS6 out of a '05 CTS-V. He forwarded your email to me and asked me to send you some of the pictures I have of the car.

I will include a couple of the pictures I have taken. If there is another view or a specific portion of the car that you would like, please let me know and I will be happy to accommodate.

As a side note, may I also express my satisfaction with Inland Empire. I have a '67 Charger that I installed a Viper T-56 six speed (along with SMPI and twin turbo's). As I was assembling the car, Inland Empire was very helpful with measuring, and creating a driveshaft. As my dad reached an impasse with his project, I was quick to steer him in your direction.

I installed an LS-6 and T-56 6-speed out of a 2005 CTS-V in my 2003 Miata. I had a lot of difficulty trying to find someone who could help me with a driveshaft. I ended up having an adaptor machined to mate another adaptor to the transmission. It worked but had a vibration starting at 60 mph and got worse with speed. I contacted "Nacho" and he told me he had to see the driveshaft, so I sent it to him. He called me after checking it out and told me it checked in the machine but from experience knew it would vibrate because it was incorrectly piloted. He told me I had to pilot the shaft off the 3-bolt Cadillac transmission and differential flanges and not the output shaft and pinion shaft. He told me he had adaptors to do that and that he could modify the shaft I sent him and make it work. I asked him to proceed and a short time later I installed a driveshaft that fits precisely, pilots off the flanges, and doesn't vibrate at 85 mph. Had Nacho been my first contact, I would have saved 9 months of frustration and about $800. He's my "go to" guy from here on out.

Fab-10 ultra4 car was ready to race in the last edition of King of the Hammers 2013. Unfortunately the day before the starting position qualifying, we had some unexpected issue with the driveshaft.

We didn’t t have a spare. A fast call to Jeff @ Inland Empire Drive Line Service in Ontario, CA., some measurements and..... Laura left the desert to Ontario. By the time she got there, about 2 hours, the driveshaft was ready to be picked up.

The day after we raced to qualify. Then the big day came. We finished in 22nd position of 27 finishers on 129 cars started.

It was the most brutal KOH ever, they said.
We still are the strongest European team.

Thanks Jeff and his crew @ Inland Empire Drive Line Service for their fast support and hardcore components. 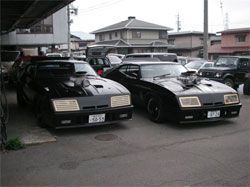 The shaft you had sent out arrived last week. It was able to be installed perfectly last weekend. Running is perfect, and it doesn't have the vibration at all either. Thank you. 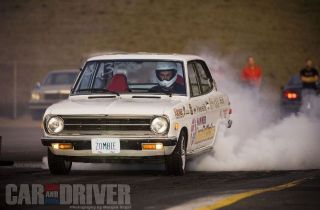 I have perhaps one of the most demanding applications a driveline must endure – the instantaneous torque of an electric motor loaded in direct drive fashion (no flywheel or tranny needed) in a rear drive, street legal electric drag car. Known as the White Zombie, my electrified ’72 Datsun1200 sedan dispatches 0-60 in just 1.8 seconds and runs 10.258 in the ¼ mile. It’s series wound DC motor generates 772 ft. lbs of torque at 0 rpm!

Before acquiring the light weight, but heavy duty aluminum driveshaft built by Inland Empire Driveline, we went through numerous drivelines that simply couldn’t hold up to this torture. The Inland Empire driveshaft however, has taken this amount of instant twist for several years now without any problems. It slides onto the splined output shaft of the electric motor and terminates at the input flange of a Strange aluminum Ford 9 inch fitted with 3:70 gears, a Detroit Locker and Dutchmen Motorsports 31 spline axles turning sticky drag radials.

Thanks to the good folks at Inland Empire for building a bulletproof driveline that my electric car can’t destroy!

Watch a 108 second overview of products we offer at Inland Empire Driveline.